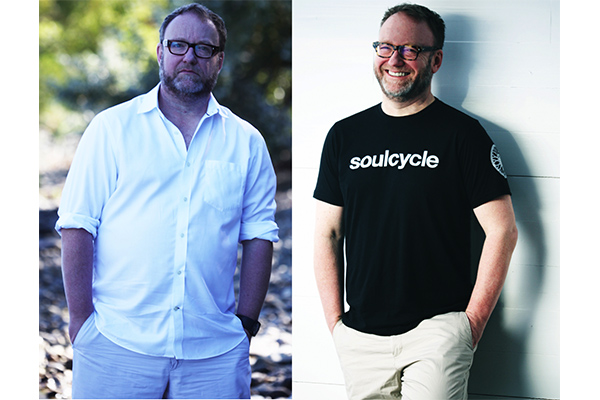 “Bike 14 is having a moment.” Those were the words that started a fire. Let me explain.
So I was fat. It crept up on me, I guess, through a combination of stress, travel, fun, and a whole lot of food. I exercised, sporadically. I actually rode at a place called SoulCycle, you’ve probably heard of it. I lived in San Francisco at the time and was one of the first people in the Marin studio when it opened. I loved the instructors, Ian, Jenny, Heather, Paula, and the riders. My colleagues got tired of me talking about it. I’m a designer by trade and the whole vibe felt right from the beginning: dark room, good smells, the details that made other places kind of ick had been ironed out and designed well. But none of it was serious -- I was sort of playing the part of someone taking control -- trying to exercise as opposed to committing to it. Then one day I went to the doctor.
“You’re a ticking bomb,” was the first thing I heard. High blood pressure, blood sugar off the charts (I’m diabetic and this was not good). I was getting close to what diabetics call “the wall” - where you move from being able to control your sugars with medication to needing to inject insulin. I was entering a dark tunnel - heart attack, stroke, the life of a sick person. I panicked. I happened to be in China at the time on a business trip and over dinner, two close friends and colleagues staged a minor intervention, telling me that they loved having me around but that they were concerned about me. Coincidentally, I was working on a project looking at palliative care and design's role at the end of life, and here I was, edging myself toward it. I was photographed for a major magazine. I stared back at myself from the picture and I didn’t recognize what I saw. It was time to do something.
My friend told me about a diet she had tried called Whole30. She gifted me the book. I read it cover to cover and thought: “This is like SoulCycle: nice language, simple, well designed, the details that make other diets kind of ick have been ironed out.” I took three weeks off work, my partner Jim and I locked the doors to our home in Montauk, emptied the fridge, and bit down on a stick. It began. No booze. No sugar. No bread. No cheese. No grains. My body went into spasm; I craved everything, but it did pass. Three weeks later, I emerged, a little less crazy, a little lighter, a little more confident that this ship might turn. Time for exercise.
Enter Riqué. I’d done his class before in TriBeCa. I knew he was cool. I knew he had a tribe. I knew that they were all flawless unicorns, and that I was in comparison, some chubby rescue donkey from a kid’s zoo. I knew that. But I had to push myself, get myself scared again. I was working on a project about older adults staying vital by trying new things, learning, failing, succeeding. I was 53 and I needed to embody that. I signed up. Back row, dark corner. I arrived at 6:00 AM, everyone, of course, in cool outfits, with a casual, don’t-give-a-%^$, sporty air about them. I was sweating profusely before I entered the room. I did the class. It was achingly hard. I thought I was going to have a stroke. I did it. I signed up again. I put myself in the front row, which almost collapsed my Monday-at-noon in a hysterical flurry. I waited.
The day came. I was front row. Bike 14. I got there 45 minutes early. Everyone started to arrive. I freaked out. I couldn’t do it. I was the donkey, the unicorns would know. I went and told the front desk I was panicked and could they move me. They smiled benevolently and sat me back in the dark corner. I did class, and seethed at myself the whole time. I work in a company where we talk about unlocking people’s confidence, and here I was, not living up to that. I plucked up the courage and went up and talked to Riqué at the end of class. “I heard Bike 14 was having a moment," he said, kindly. I was mortified.
I called my best friend, who was a Riqué unicorn. I begged: “Get me in the front row. The middle.” She did it. This was it. Make or break. I got there early. So early I had to walk-around-the-block-because-I-was-embarrassed-to-walk-into-reception early. I clipped in. Riqué came over to me. “This is a big day for you,” he said.
I didn’t just ride that day. I flew. All the things you hear, happened. The room, the people, the music, the energy. Everything gave me the confidence I needed. I hit the beat, on the hardest, fastest of songs. Riqué came over and gently tapped my hand at the start of his notoriously difficult sprint. The tiniest symbol of belief in me gave me the boost I needed. I knew this was it. I had to fly. I did it, every single beat of the seven longest minutes since time began. I was far from being a unicorn, but I certainly was the world’s fastest donkey that day. 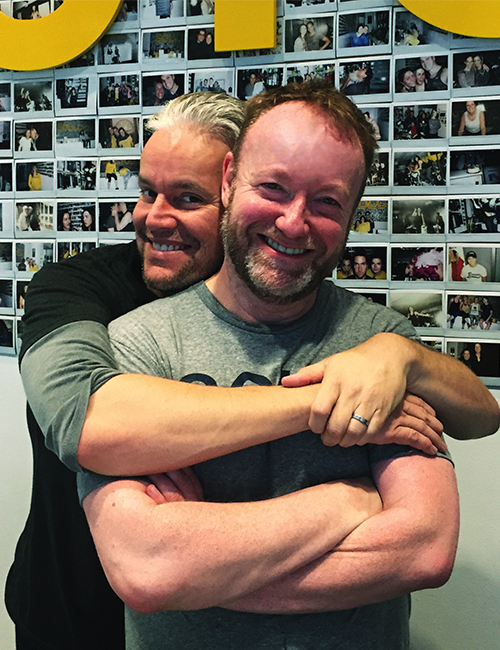 I have never left the front row since. That’s it. No hiding in the corner. I’m now better than ever, and I’m getting stronger daily. I’ve not had another “moment.”
So...I’m no longer fat. I’ve lost almost 50 pounds since this began. My doctor told me that what I’ve done is “miraculous.” I feel amazing.
I wrote to Riqué and told him this: "I once read an article in a magazine for children, where kids were asking difficult questions of experts. One kid asked a pilot: “How do planes fly?” The pilot answered: “Strangely, planes do not fly because of hydraulics and mechanics. They fly because everyone sitting in them believes that they can. Flying is merely the collective suspension of disbelief.” I wanted you to know, that for those of us sitting there in the dark, you are not teaching us to ride, you are teaching us to fly, suspending our disbelief that we can’t and showing us that we can.”
I’m currently the world’s happiest donkey. I really hope that my unicorn wings are starting to grow.
Do you have a Soul Story to share? Email blog@soul-cycle.com! Want to ride? To book a bike, grab a series HERE then book a bike!
MORE FROM SOUL
27 Pounds Lighter In Just 4 Months: Indy Purushothaman’s Soul Transformation