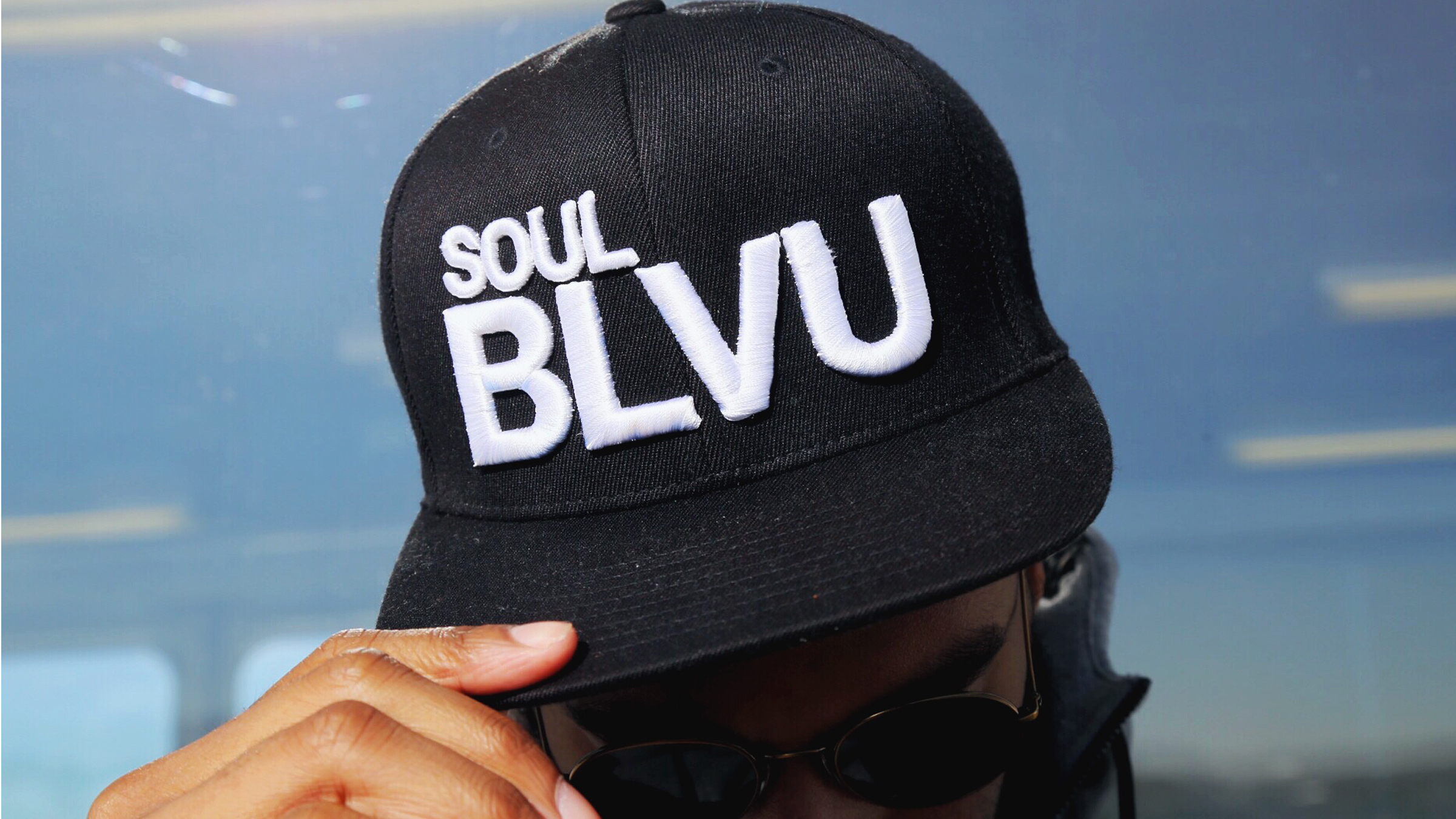 The Mantra That Motivated Earl to Follow His Dreams

etbacks can lead you to success: Instructor EARL BENJAMIN reveals how taking a risk, facing failure and persevering through made him stronger than ever before…

Over the past year, I’ve had to make, hands-down, the most difficult decisions of my life. Even as I sit and type this now, I’m struggling to find words that can describe the CRAZY events that have turned my world upside down in the best way possible. On Feb. 29, 2016 (Leap Day), I took a giant leap of faith and submitted my resignation notice at my corporate job in journalism. The fear of change and failure kept me from making this decision sooner, but I knew I had to make a change. I’d spent my life listening to what other people thought was best for me and forgot that I had a say. I needed to see what was on the other side of fear though. So I jumped.
Fast-forward one year later, I can confidently say that I am doing something I never dreamed possible. My passion for life has been re-ignited as an instructor at SoulCycle, but the road that lead to this point has been anything but easy. This wild ride has given me three words that I now live by: “Dream. Do. Repeat.”
DREAM
I’ve always been a dreamer. That part came easy for me. But when it came to actually DOING, I would stick to things that I was pretty confident I could succeed in. I’d take the risk only if I really believed I couldn’t fail. Living like this had me feeling pretty empty inside. I wanted so much more but was afraid of how I’d look if I didn’t get it. And I’d always been a perfectionist so just the idea of “failure” was not one that I was ever okay with. I think everybody eventually comes to a place in their lives where they have to decide what is worth it to them. I got to that place in 2016. I wanted a job where I could feel fulfilled. I was tired of wondering “what if” and decided to audition to become a SoulCycle instructor.
DO
It's never easy putting yourself out there, taking a risk and not knowing what the outcome will be. I encountered more moments of self-doubt than I could've imagined. I questioned if I made the right decision to leave my job for this. There were moments that were just plain scary. But I've found that what's even scarier is never trying at all. For each moment of fear and uncertainty, I would replace that thought with all the affirming words I could think of. I was also surrounded by a group of people who were supportive and encouraging me to face those fears head on. Honestly, that is what helped me the most. Having a community.
I remember one day in my pre-training phase where I felt like giving it all up and applying for a “safer” job. My instructor/mentor, Lily, unknowingly helped to snap me out of it. She reminded me after class to pull from within to find the person that I am becoming. She spoke of her own similar journey and how SoulCycle pushed her through it. I know it wasn't a coincidence that our lives crossed paths. It was just the reminder I needed to keep pushing. Keep fighting. 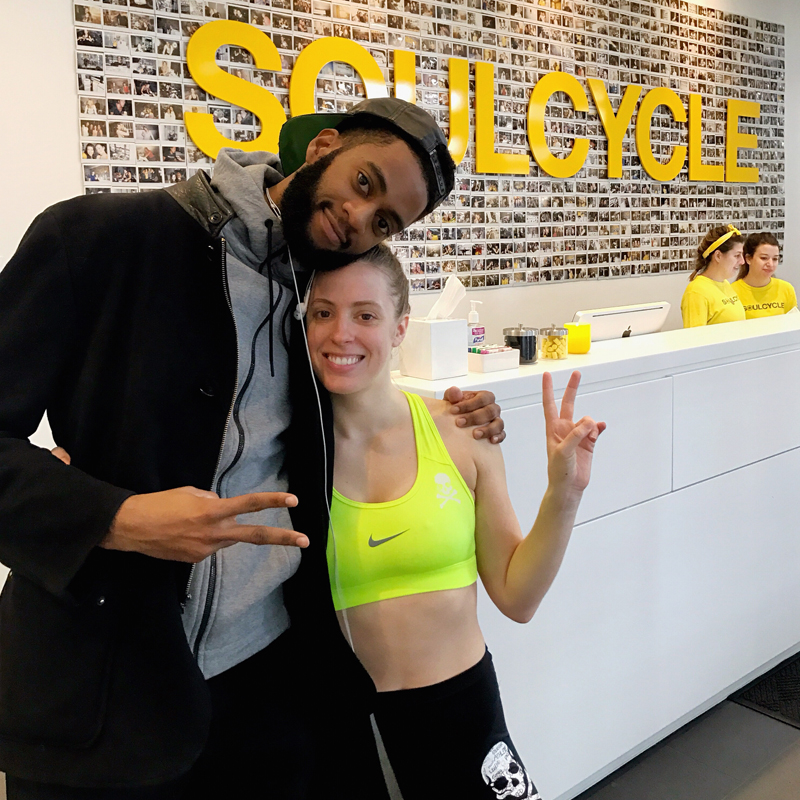 Audition day FINALLY came and I walked into the room feeling every single emotion you can imagine. I was facing my greatest fear: potential failure. I knew I wanted it more than anything else so I did my best to silence the all the voices in my head that were telling me I was crazy for thinking I can do this. When it was my turn at the podium, I went up and gave it everything I had. Almost two days after my audition, I was still coming off the high. The moment I walked out of that room, I knew I wasn’t the same person. I’d conquered a fear. I felt braver and stronger than I’d ever felt in my life. Just that feeling alone was worth the sleepless nights that led up to it. I still remember when I got the call-back for round two of auditions. I was at the W4 subway platform in NYC and I’m sure people thought I was crazy. I almost jumped over the moon in that moment. I was on a crazy high, completely unprepared for what would soon be a crazy low...
I prepared and over-prepared for the second round. The fear was still loud and clear but I was learning more and more how to silence it. I walked in and gave it all I had. Again. 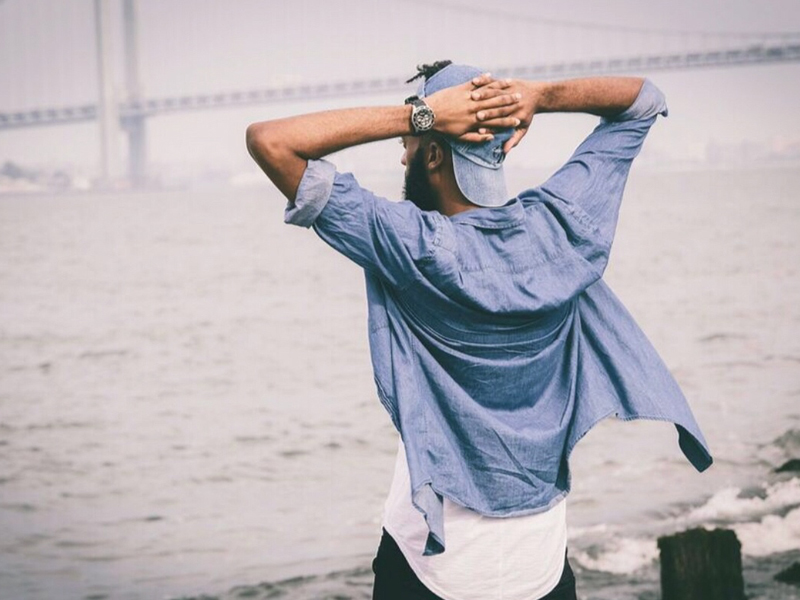 REPEAT
I could not sleep a wink after the second round of auditions. I had done everything in my power at that point, so all that was left was to wait. I did my best to go about my daily activities until the email finally came in. I re-read it slowly until it finally sunk in. I did not get into the summer training program. Crushed. I was beyond crushed. I’d left my comfort zone and faced my fears only to experience the one thing I’d been running from my whole life: “failure.” I put it in quotes because I now realize that what I was running from was the only way I could grow stronger as a human. One of my favorite author’s, John C. Maxwell says it best: “Embrace adversity and make failure a regular part of your life. If you're not failing, you're probably not really moving forward.
Everything in life brings risk. It's true that you risk failure if you try something bold because you might miss it. But you also risk failure if you stand still and don't try anything new.
Failure is simply a price we pay to achieve success.”
I had two choices at that point. I could let that moment define me and give up on the crazy notion that I could drastically change my life or I could do something even crazier and try again. I allowed myself two full days of sulking and with the help of an amazing friend (thank you, Sai), I decided I would fight for what I wanted. That’s where the final word of my mantra comes in: REPEAT.
I decided I would train even harder and work my butt off for the next try. And the second time around was actually scarier. I had to shut fear up all over again. I held on to every ounce of faith I had left, prayed and took the leap. Again. 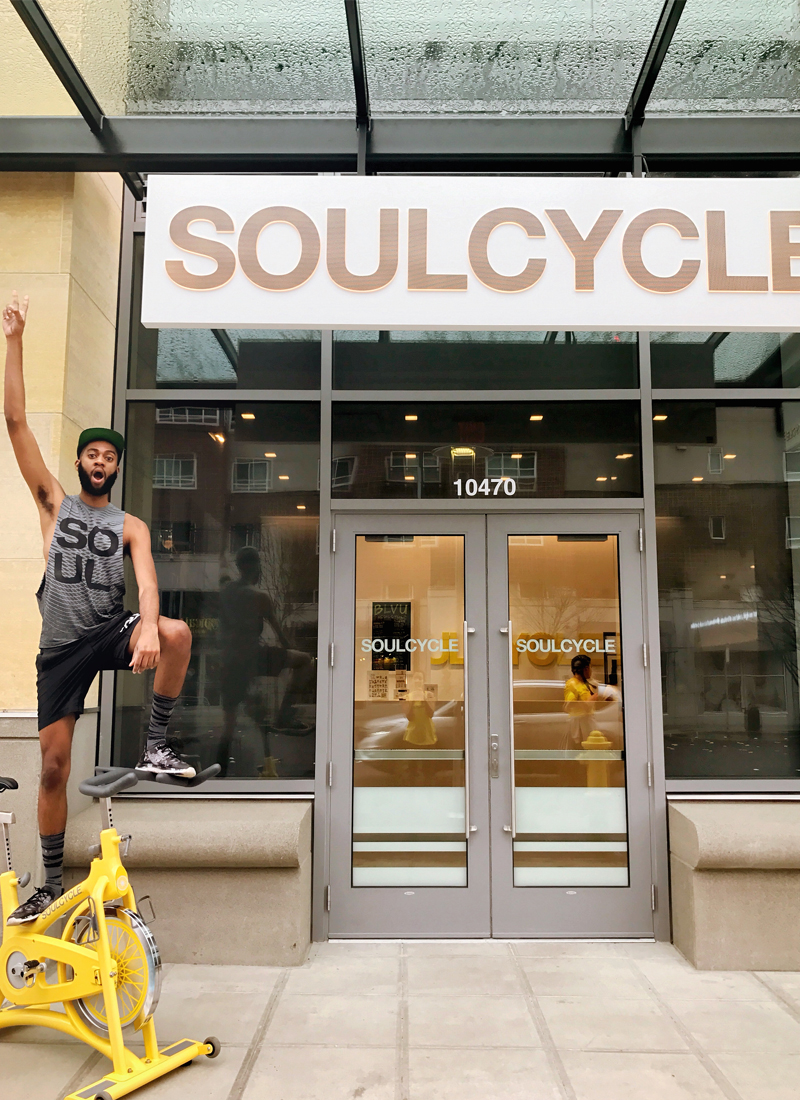 “When achievers fail, they see it as a momentary event, not a lifelong epidemic.” I gave it my all and poured it out. I gave it my everything. I walked out feeling that same bravery from the first round, but this time I was at peace with whatever the decision would be. I knew that I’d put blood, sweat and tears into something I believed in and sofast-forward a few days later, I found out I made it into the Fall training program!! The risk that I took on Leap Day had finally paid off and I was flying high.
Looking back on that crazy rollercoaster of a year, I can honestly say playing it safe is no longer an option. I learned that your story isn’t over until you say it is. We decide how far we want to go and how much we can achieve. Change has not been easy, but it’s been more than worth it. That’s the cool thing about SoulCycle for me. It gave me an opportunity to fail forward and grow. We all come into a room with different backgrounds and experiences, but the moment we click into our pedals, we are all chasing the same goal. To leave this room stronger than we walked in. We move forward. 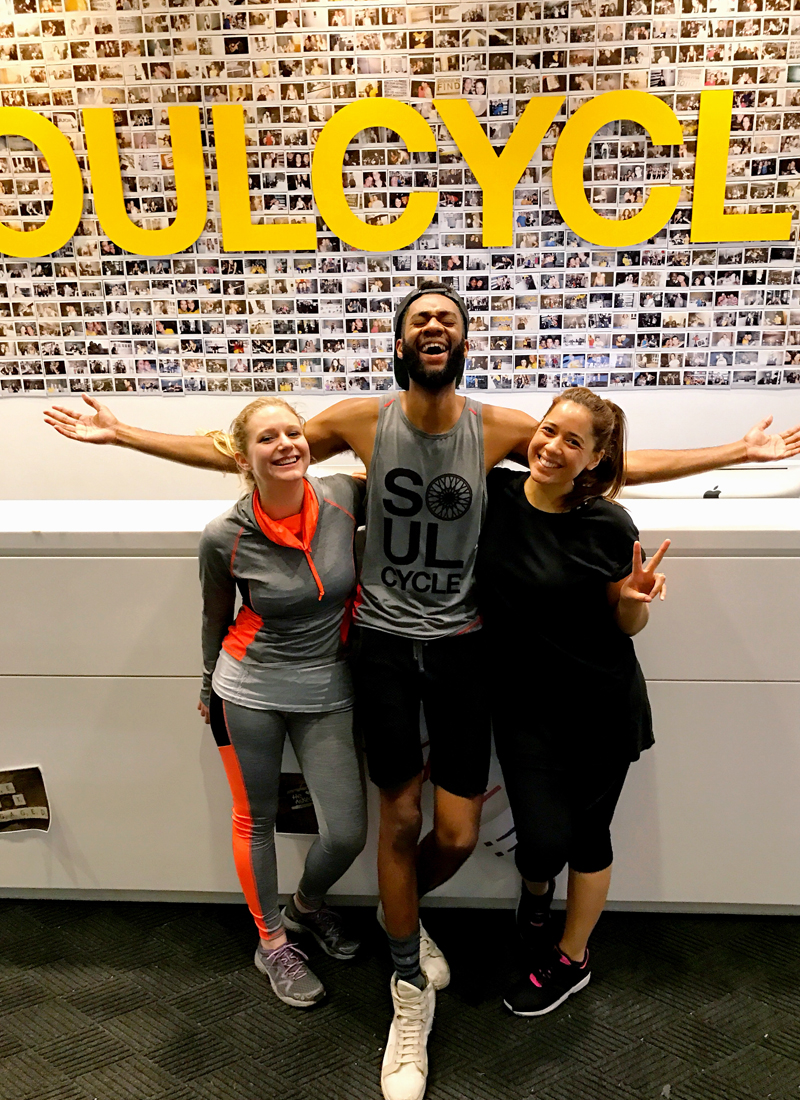 We often stop moving when we are afraid of something and those are the times we get stuck. Instead of letting the fear paralyze us, it should serve only as a reminder we are moving in the right direction. I now find myself living something that once used to be a dream. I get the utmost satisfaction from seeing people thrive and become the best version of themselves. There are no words for this. I’ve met some of the most incredible people along the way who continue to inspire me. And just when I thought I was done taking big risks for a while, I decided to pack up 10 years of NYC-life and move across the country to help open a brand new SoulCycle studio in Bellevue, Washington. Because life is too short to just dream once.
You Dream. Do. Repeat. And so on. 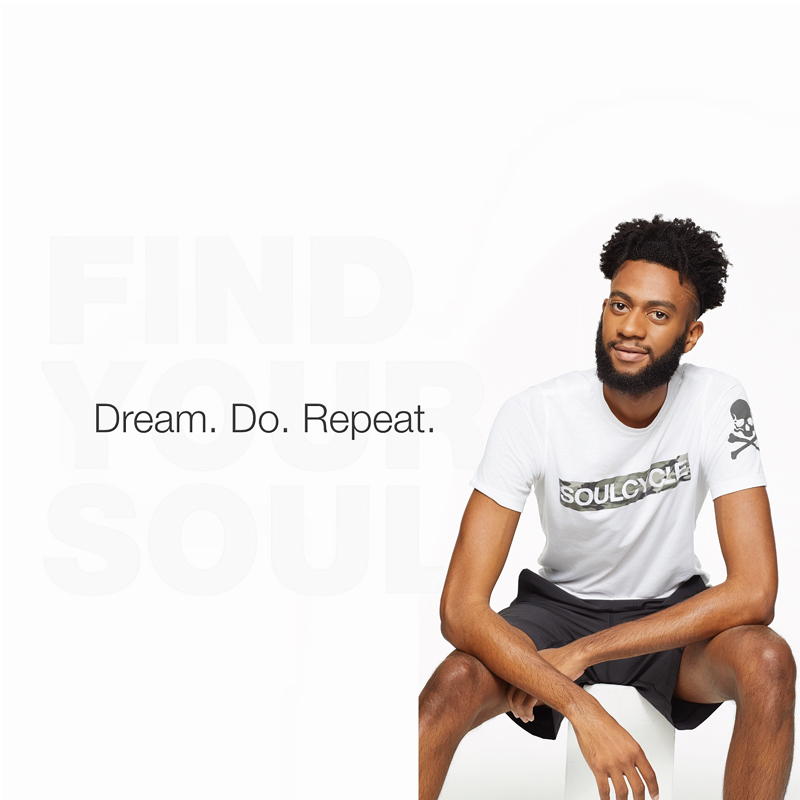 Catch classes with EARL at Bellevue. Want to ride? Grab a series HERE and book a bike!