How Lindsay Buckley Found Strength for Her Son

October 29, 2015
Instructor LINDSAY BUCKLEY’s son Madden was just three months old when they discovered he had a condition that required immediate brain surgery. A month after his release from the hospital, she opens up about the heart-wrenching experience and how Madden’s proving to be a warrior just like his mom… 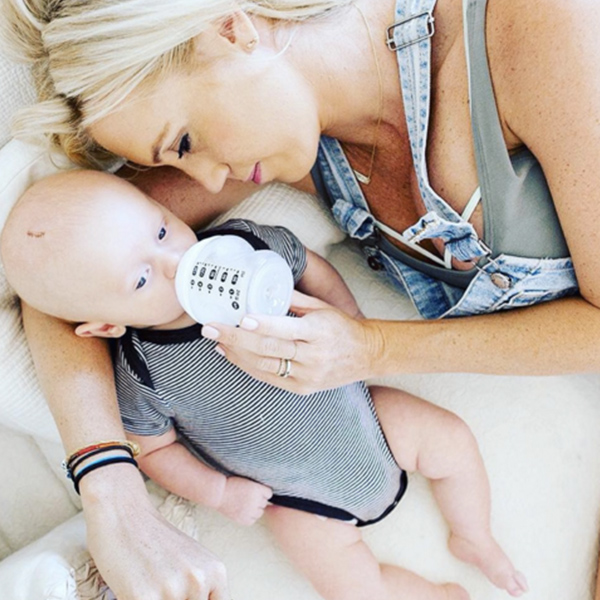 “He’s going to need brain surgery.”
I was told those words over the phone on August 26, 11 weeks after my son, Madden was born. It all started at Madden’s 8-week wellness check-up when the pediatrician said his head seemed to be measuring large — the circumference jumped more than 60 percent in just four weeks. I just thought he must have an adorably large pumpkin head to store his oh-so-efficient and wise brain. She scheduled us for an ultrasound the following Wednesday at UCLA. My husband Scott met me and Maddie there where he napped through the 30-minute procedure. It was quite simple: They used the sonogram tool and glazed it over his head, recording different angles of the brain. I remember watching the screen and thinking that the images didn’t look like typical brain images I’d seen online and on TV; something seemed off. 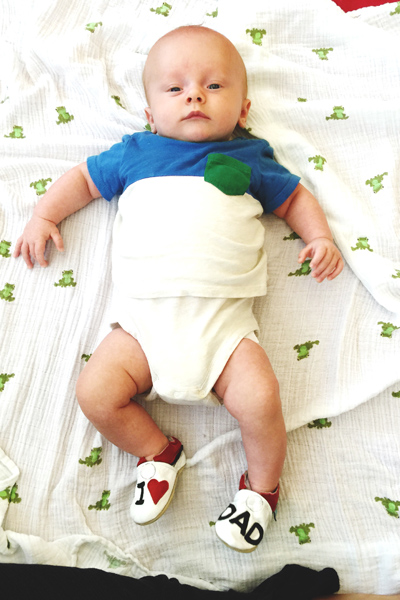 The next morning, I went to teach my 8:30 AM class in Santa Monica, then Scott and I did our morning baby hand-off where he brings Madden to the studio on his way to the office. I took the lil guy home, got him down for a nap and went to jump in the shower. I noticed a voicemail from some 310 number and decided to actually listen to it.
It was our pediatrician — she said I needed to call her back to discuss maddens ultrasound results. I knew that couldn’t be good. I called her back, and just listened. She reported that his ventricles were swollen, that there was too much brain fluid in the brain, and it looked like hydrocephalus. I sat there for what seemed like an eternity, and said “Okay, bye.” I don’t think I’ve ever cried so hard. I called Scott and couldn’t get the words out. I couldn’t catch my breath. I couldn’t tell him anything except for “something is wrong with our baby.” I then called my mom, and the same scenario unfolded.
Mom and Scott jumped on it, and we were then scheduled for an MRI more than a week later. With hydrocephalus, and honestly anything with babies, time is of the essence. Waiting more than a week for answers was not going to work for us. My mom, illegally I might add, called every medical practitioner in California acting as Madden’s mother trying to schedule an infant MRI with anesthesia. Maddie would need to be put under as one cannot move for MRIs, and babies aren’t good at that, especially our wiggle worm. There are very few facilities that do infant anesthesia as well as an MRI, but my mom was able to get ahold of the UCLA staff at the Santa Monica location to move his MRI up to Wednesday morning, instead of Thursday night. 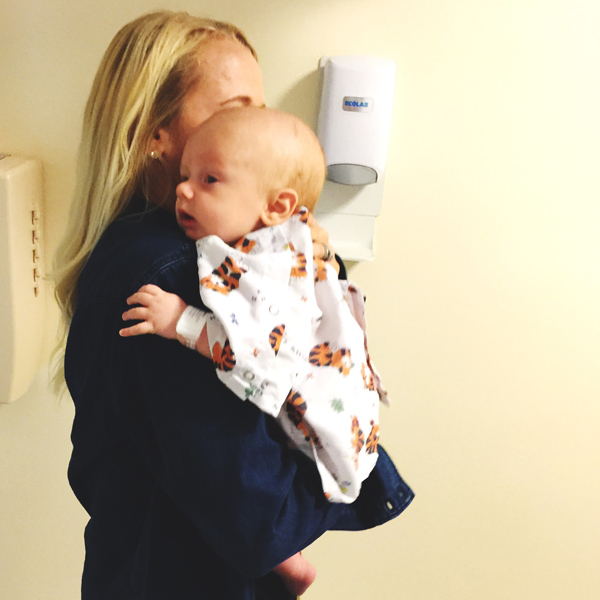 We had six days of waiting and wondering. Of course, I did what you should never do, and Googled everything. I learned more about hydrocephalus and the infant brain, and brain damage and therapies and support groups in those days than one could in a lifetime. I cried more tears in those days than what seems humanly possible. but I also worked. and I put on my big girl spandex and went to class and tap backed to Trap Queen, and talked about picking positivity.
Scott and I decided that night that we were not going to treat Madden any different. We would bathe and swaddle and laugh and encourage tummy time and make stupid noises and take him to church and dinner NO MATTER WHAT. As much as it felt like life was stalled, we had to live every day like it was a normal, beautiful day.
Then comes MRI wednesday. Madden wasn’t allowed to have any food or drink for four hours before the procedure. My mom and sister Megan accompanied us to the Santa Monica UCLA location where, after an annoying wait, the baby had his MRI, and woke up seemingly happy and fine. He was in good spirits the rest of the day, and napped well. That night we got another call from the pediatrician:
“We have the MRI results and Madden has hydrocephalus. You’ll meet with a neurologist and he is going to need brain surgery.”
You could imagine the horror felt in our house. And that of our parents, siblings and close friends. It seemed like a bad dream just continuing on.
Following suit, we were told we would have to wait another week to meet with a UCLA-affiliated neurologist to discuss the particulars and the approach. No one slept that night. Our biggest fears were confirmed and all we could do was wait.
I woke up Thursday morning to teach again, and don’t really remember much honestly. I was invested in class, but felt outside of the room. As you now know, Scott and I do the baby hand-off, but he wasn’t at the studio. I had a text from him telling me to come home because he wasn’t heading into work just yet, and we needed to get on the road and go to Orange County. My mom had incessantly called around and booked us an appointment with Dr. Michael Mahonen, the head neurologist for Children’s Hospital Orange County at noon on Thursday.
We hauled down the 405 and met the man. He was so smart, and concerned yet level-headed and a professional. He explained madden’s condition to us: There was a blockage at the base of his brain. Some fluid or blood had accumulated there and clogged the pathway for the brain fluid to exit that space properly. The best way to solve this problem would be by way of endoscopic third ventriculostomy. He would use a scope, go through the top of the baby’s head, navigate through brain tissue down to the blockage and clear out the debris. It was an eight-minute procedure. Eight minutes where a millimeter off would be catastrophic. As frightening as brain surgery sounded, something finally felt right. This was our guy and our way of treatment. I’d heard about shunts being implanted and the complications associated there, and we could avoid that route. Dr. Mahonen cleared his Monday morning and booked Maddie for his surgery at 7:30 AM
Family flew in. Friends took off work. People embraced us with support, and we prayed. We prayed so hard.
Monday morning: No food or drink after 3:30 AM. Got to CHOC; Madden was happy and in good spirits, despite being hungry and a bit skeptical of the surroundings. The nurse took him from my arms and we waited. The time actually flew by and Dr. Mahonen walked a very deliberate pathway over to Scott and I and our crew to report that the “surgery was pristine and very, very successful.” 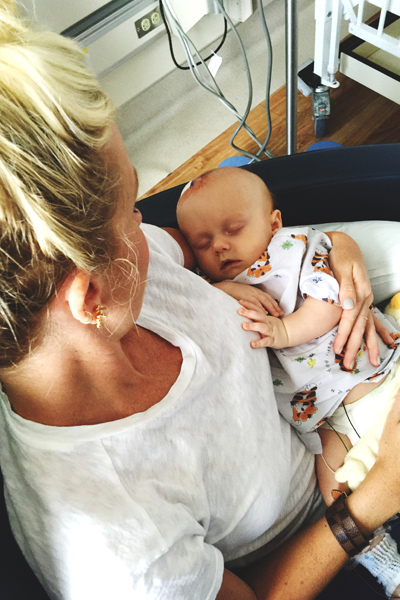 Scott and I rushed off to recovery to see our boy and eventually moved up to the PICU. One thing I definitely wasn’t prepared for was the pain Madden would experience post-op. He was cringing and screaming and having mini-seizures and I couldn’t do anything. I tried to hold his little arms down and kissed his cheeks as you could feel each one coming on. That Monday afternoon was the longest of my life.
I think God was definitely with us the entire time, but I must say that he intervened Tuesday morning. At 12:01 on the dot. Madden had not slept the entire day of surgery and had been a mess, when finally, on this new day, as I was sitting on the hospital bench/bed praying, I heard a familiar sound. He coo-ed. It wasn’t an all out “I’m obsessed with you mom, you’re so funny” coo, but it was a coo and it was his. I jumped off the bed and went over to see big, wide, bright blue eyes staring at me. He latched on, and let me hug and hold him close. He fell asleep in my arms and woke up a few hours later, in even better spirits. When our family returned to the hospital, they were blown away by the difference in the baby. He was back. 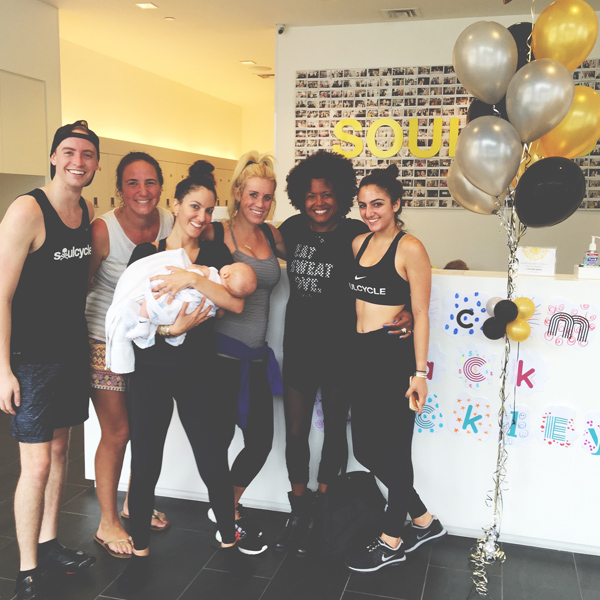 Now Madden is doing fantastic. He’s been his happy-go-lucky self, appearing a bit more wide-eyed and actually sleeping more! We can report that, at this point, there has not been any brain damage as we seem to have caught this very quickly. Madden will undergo many ultrasounds to be sure that another blockage doesn’t occur, and we will be always on watch for symptoms indicating such. We aren’t totally out of the woods, but I think I can see the ocean on the horizon and it looks beautiful.
I wasn’t sure how to talk about this. Or when. Or to who. I just let go. And to those people whom I just let it go to, thank you. You will never know how much your love and prayers mean to me and my family, and to baby Madden. Maybe this is a lesson, or the first of many bumps in a rocky road, but I’ve learned in these horrible weeks, that we can get through anything. We, me and Scott and Madden and our families and friends and people. We’ve got this.
Those days were been the worst. The most devastating. But something so weird about this experience is that I keep saying “I feel lucky.” Scott continues to give me a look of skepticism when I say that, but I really feel blessed to have been through this and be where we are at this point. Maybe some bad days could be your best days. 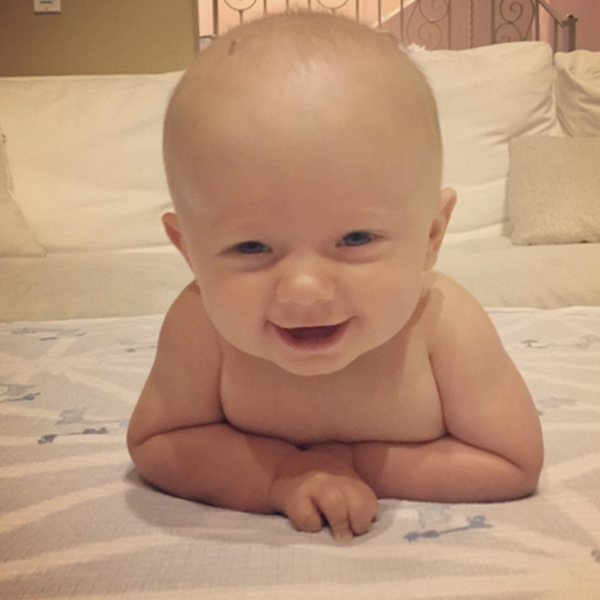