July 3, 2015
After the devastating loss of her mother, SARAH STEMPIEN clipped in and began healing on the bike. "I put the resistance on for my mom and I put it on for me," she says. "I didn't know that by losing my mom, I'd find myself." Now Sarah shares her Soul Story… 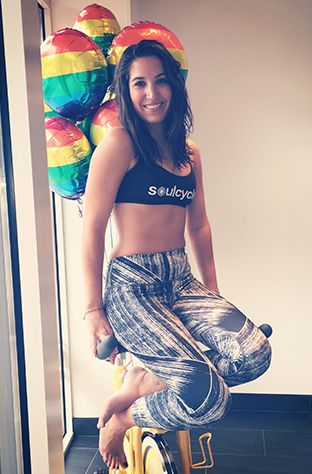 On May 22, 2014 I lost my mom. She had been sick the majority of my life - when I was 2 years old, she lost all but 18 inches of her intestines - but to this day I still can't believe she's actually gone. My grandfather had died just 32 days earlier so to say my world totally and completely fell apart is an understatement. I had no idea who I was or where I belonged. One thing I did realize was that I didn't want to live a life of "I wish"-es. I wanted to see, go and do anything I wanted to. I thought of my mom saying "When I get out of the hospital, you know what I want to go and do?" ... I didn't ever want to be the person that says that about ANYTHING. I simply wanted to do what my mom was robbed of doing: I wanted to live.
I came up with a plan where every month following her death I was going to do something or go somewhere that somehow led back to my mom. I explained it to my friends as a map she left behind for me to follow as a way to cope with her death. I did everything from Yankee games to traveling to Mexico.
As we entered 2015, a coworker Emma suggested SoulCycle. My neighbor Kaylee works at the Greenwich studio and growing up we always rode bikes around the neighborhood. I was sold. The night before my first class with Conor I barely slept I was so nervous. I went, survived, went back again, and then doubled on my third visit to Soul. That's right, Ben at the front desk convinced me to double during a snowstorm when I still didn't even know how to get my shoes out of the bike. Not only was I going as frequently as I could but because I work nights as a nurse, some weeks I wake up in the middle of the day just to register at noon before going back to sleep. 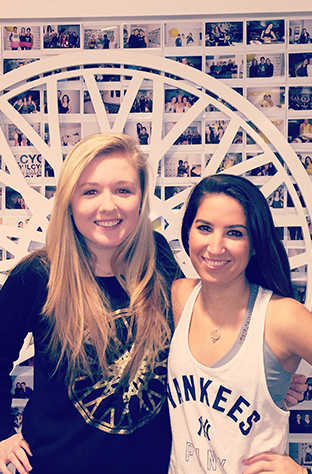 Sarah with her friend Kaylee
For my birthday in April (and my first without my mom) I wanted to get as far away as possible. I texted a friend, told her I was visiting, and then I booked a flight to see her… in Bali. I mean, that's pretty far, right? Despite being halfway around the world, I got up in the middle of the night when it was noon EST to register for classes.
When I got back I was doing my usual Fri-yay nights with Ryan Foley and it was going to be our last Friday night 5 pm at Greenwich due to Westport's opening. I doubled and for the second class, he pointed to me, then pointed to Bike 8. Safe to say, I knew I wasn't getting out of that one. From that class forward, I went from the third row to front row…. unless you're a certain instructor and then in that case I still try to hide in the third row (hi, Conor!). Let it be known: attempting to hide in the third row doesn't always work (hi again, Conor!). 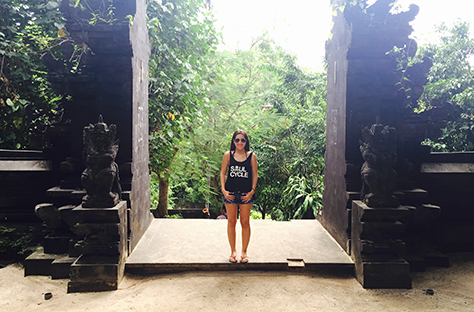 Sarah in Bali
For the first anniversary of my mom's death I knew I'd need something to take my mind off of things and SoulCycle was exactly it. I doubled and those 90 minutes was everything I needed and more. The support, the encouragement, the music, the sweat — I needed it all. I may have cried in between classes, but I left fully aware I could handle anything that came my way that day. I knew that I was physically, mentally and emotionally stronger because of SoulCycle. Conor, I know I said it a thousand times already that day but here it is one more time: THANK YOU.
I didn't know that by losing my mom, I'd find myself. There isn't a day that goes by that I don't think of her and she truly is present in everything I do. On my foot I have a tattoo of an arrow and the base of the arrow in my mom's handwriting reads, "I love you always." She is the arrow that will guide me every time, all the time, and will continue to do so for the rest of my time. 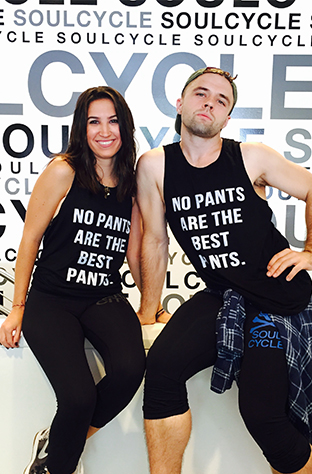 Sarah with instructor Drew B.
I had no idea when I started this journey that I'd end up at SoulCycle but I honestly can say I would not be where I am without it. Therapy might have been a cheaper option, but to be in a room totally in sync with each other and the beat is a high I'll never get tired of. No matter what, we are there for each other and we ride with each other. In class, Nina always talks to us about who we're putting the resistance on for. I put the resistance on for the instructors, I put it on for my neighbor, and I put it on for the rest of the pack. Most of all, I put the resistance on for my mom and I put it on for me. When you're given resistance, you're supposed to push through it. Which is exactly what I've done. I pushed through it all. And I survived. The "map" she left behind led me to the person I am today. I think I was supposed to end up at SoulCycle all along. They say the two most important days in your life are the day you are born and the day you find out why. For me, it just took a ride on a yellow bike to discover that. 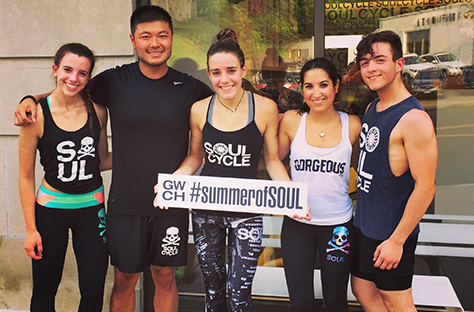 Sarah with the Greenwich pack
A huge thank you to everyone at SoulCycle Greenwich for giving me a place and an experience I didn't know existed. I am, and continue to be, #SOULgrateful. I know that if I named you all I'd for sure leave someone out, so we'll just leave it at this: I'll see you on a bike.
Do you have a Soul Story to share? Email blog@soul-cycle.com!