November 12, 2015
SARA WILLIAMS dreaded going to her first class at SoulCycle Bethesda eight months ago. But once she clipped in, she never looked back. Now 40 pounds lighter, she opens up about how the community has supported her in her fight against depression… 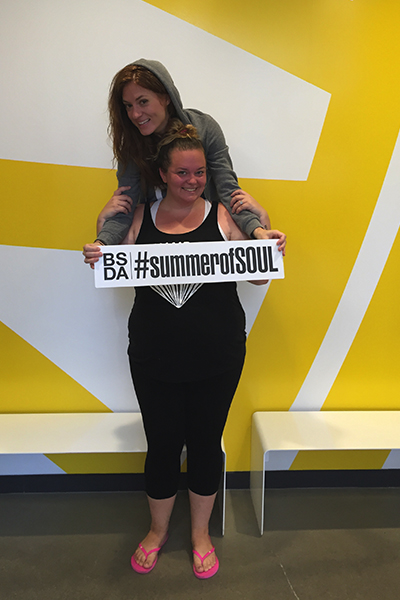 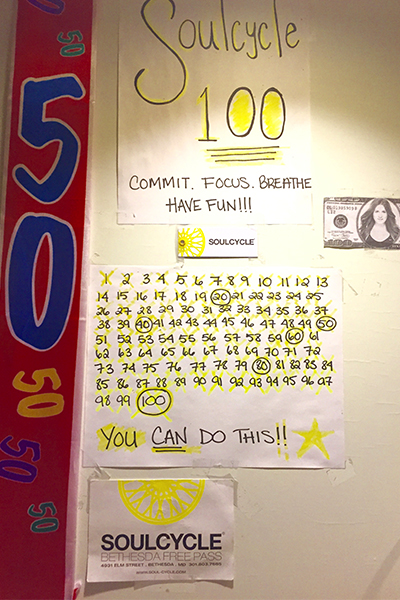 I completed my 100 rides in five months and when that ride came, it was the first time in my adult life that I had actually completed a physical goal that I had set for myself (and trust me, I had set quite a few).  I walked into that studio and they had decorated everywhere. My friend Becca had covered my bike with streamers, pictures from my Instagram plastered the walls of the studio, and of course, I got my “100 cupcake.” I worked hard for that cupcake and you better believe I enjoyed every single bite.
The other ride that really stands out to me is a theme ride I took with my first Missed Soul instructor, Michelle (see, I came back!). It wasn’t your typical ride to EDM/dance/hip-hop. It was a Beatles ride and it was so unbelievably fun. It was one of those classes where you say, “Now THAT was a SoulCycle class.” Michelle took something that seemed nearly impossible (Beatles and SoulCycle… there were skeptics) and made it pure fun. People were cheering and singing along to every song. Michelle, as usual, was a dancing and singing machine, and the energy in that room was literally vibrating off the walls. Watching a whole room move in unison to the beat of Hey Jude was just way too cool. She is another instructor that keeps me coming back. Her ability to make me realize my strength while simultaneously enabling me to have an amazing ride is something I don’t take for granted. She is funny and strong and makes me feel proud in that studio. I know she’s going to challenge me and I know I will love every second of it. 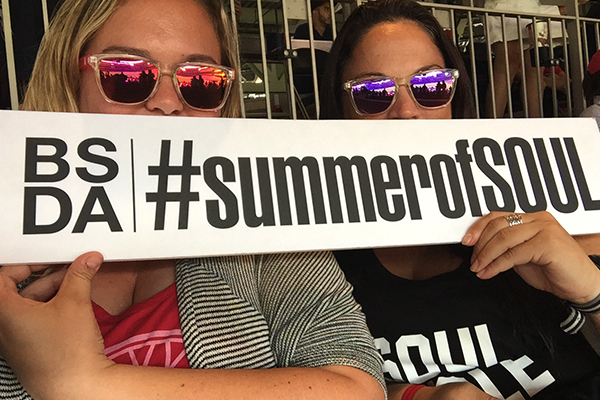 Every SoulCycle is designed in the same way with white walls, yellow citrus scented candles, a dark studio, grey bikes, a white orchid, and the iconic yellow SoulCycle behind the front desk. BSDA is no different. It doesn’t boast or claim anything beyond what riders have come to expect from each studio they enter, except for one thing. BSDA is a family. Now I’m not saying that riders don’t experience tons of love at each studio and connections with their instructors and fellow riders, but what I will tell you, is that BSDA has something extra special about it. There is a sense of community at this studio that is hard to rival. Every single person at the front desk, and I mean, every single person knows my name. They know my kid and my family. They ask about my dad. It’s become a second home for me. The staff and instructors really, really invest themselves in their riders. They become friends with you and care about you beyond their work responsibilities. I feel lucky to have met all these people. People I would have never met if I wasn’t dragged into that studio and I would have been too intimidated to approach outside those white and yellow walls. Sunny Mae, Michelle, Lisa, Allie, the front desk staff, they’ve all changed my life for the better. 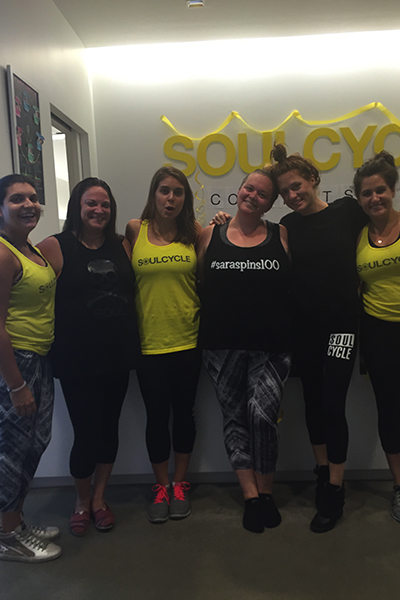 To some it may sound extreme, but for me it’s a whole new, beautiful world. I’m actively fighting against my depression in a healthy and productive way. I know on days when I need it and even on days when I don’t, I can drop it all off inside that studio, walk out to smiling, happy faces and know that I am exactly where I am supposed to be. Okay, SoulCycle, so basically I just wrote you the most epic love letter ever. I guess we’re dating now. Pick you up at noon on Monday. K, Bye.
Do you have a Soul Story to share? Email blog@soul-cycle.com! Want to ride at SOUL? Grab a series HERE and book a bike.
MORE FROM SOUL
SoulCycle 14th Street’s Healthy Obsessions
Three Soul Warriors Who Rocked the Marine Corps Marathon
Fridge Tour with Bari Robinson
Check out the 14th Street Beats Playlist
What Willie Learned in the Army
Soul Transformation: Lindsay Meola
21 Questions with Bevin
Soul Story: Genevieve Bahrenberg
Soul Story: Jessica Markus