March 9, 2015
When ERIC LEIDER decided to ask NATALIE SUN to marry him, he knew wanted the proposal to be SOULful. So he enlisted instructor ANGELA DAVIS, the Soul WeHo staff as well as her family and friends. She said "yes!" and now the happy couple share their Soul Story… 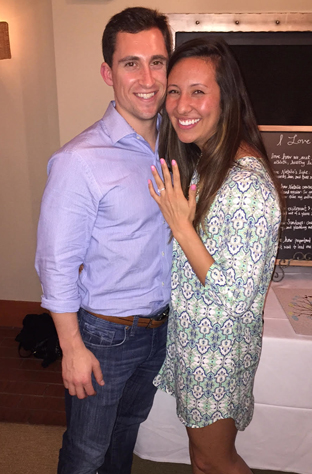 Tell us about the proposal!
ERIC: When I was thinking of how I wanted to propose to Natalie, I knew I wanted to make it fun and a day that she would never forget. She's not the type that is wooed by fancy dinners, luxury cars, or exotic getaways — but SHE IS all about her family, friends, and sweating! I did a little research and asked around on creative ways that people have been proposed to, and I came across the "scavenger hunt" theme. Because I'm a deep thinker and I liked the idea of making each stop significant in some way, I knew this was how I wanted it to go down.
I started planning close to November when I had asked Natalie's parents for their blessing, but I did not have all of the logistics figured out. However, the most important stop and the anchor holding this entire plan together was Angela's WEHO SoulCycle class. Natalie LOVES SoulCycle and I know that Angela is one of her favorite instructors! I also knew that Angela has been married for over 10 years (Instagram) and is one of the most inspiring people I've ever met.
My plan was to ask Angela if she could intentionally say things in class about "finding someone that makes you better," "surrounding yourself with people that help you grow," "love," and other inspiring things that may make Natalie think about me while in her ride. I couldn't think of a more fitting way for Natalie to start her day, on such a significant moment in our lives together. I also wanted Angela to give Natalie her first note/clue that would have instructions on how to go about her day, what's ahead, and where the next stop would be.
SoulCycle would be the first stop on the scavenger hunt, but Natalie wouldn't know until after she finished her ride (and got her note). This is because Natalie always goes to Angela's Friday 8:30 AM class with one of her close girlfriends, Eryn. I was able to email back and forth with Angela's assistant, and then I came down on a Saturday about a week before the proposal to wait for Angela after class, to steal a few seconds of her time. (She's a busy woman, and rightfully so - she's awesome!) Caitlin, the studio manager at SoulCycle WEHO , was super helpful in connecting me with Angela after her class. We chatted briefly and Angela was totally on board. Caitlin was so kind and offered to hold onto the first note/clue for a week, and give it to Angela on the day of that Friday ride - on Feb 27th, 2015 at 8:30 AM. They both gave me their cell phone numbers, so that I could remind them the night before. They were so great! 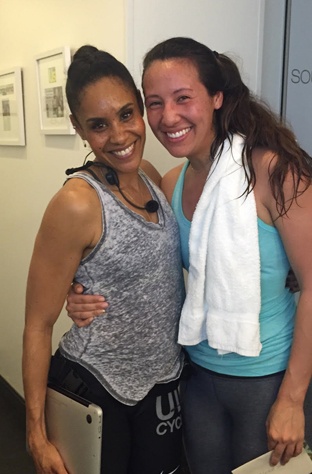 After SoulCycle, Nat would get the note/clue and it would lead her to Copa Vida, which is a local coffee shop in Pasadena. This place is significant because we did a latte art class there on our first Valentine's Day together. We had so much fun doing it together and that was such a special night for us, that I wanted to remind her of that day. I coordinated for Natalie to participate in that same latte art class, but she would be doing it with three of her best girlfriends. She would already be with Eryn (who was a big inside help with making this day run smoothly), and I also managed to have two of Natalie's best friends from San Diego come down to surprise her. At this point, Natalie already knew today was the day that she would be proposed to by me, but she didn't know when, where, and how. At this point, her day was all about spending it with her closest girlfriends and enjoying the day that I had planned for her.
The next note/clue sent her to this diner in Pasadena called Russell's. I planned for them to have brunch and mimosas there - after SoulCycle, they needed to fuel up! Nat and I had several meals there and would often go to a Farmer's Market around the corner on Sundays. The next note led Natalie and her friends to a Nail Salon in Pasadena. I got some inside information that having one's nails done on the day that one is proposed to is a must!
The next note led her to her apartment in Pasadena, which was decorated with rose petals, Hershey's kisses, tons of balloons, and another note. I also laid out the dress that I wanted her to wear for the next stop that the note/clue instructed her to go to. This note that she got at her apartment instructed her to wear the dress and meet at an address. That address was Arlington Gardens in Pasadena, which was where I would be proposing to her. However, the next clue led her to find "two young and beautiful women" at the edge of the garden to give her the last note/clue. Those two ladies were her grandmas, who came down from San Diego. They had the last note, that led her to me. 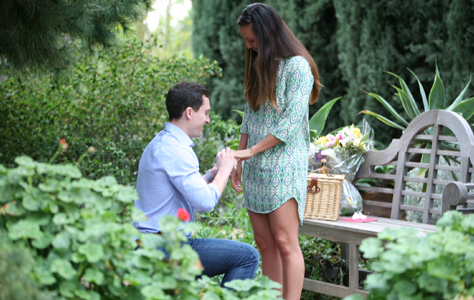